I have before me three paragraphs typed on a good old-fashioned typewriter when I was 17 entitled “Will I ever make a good writer?”. My conclusion that day was no. I’ll share it with you on some other occasion. Thirty years later, I have moved several steps closer to a more positive response. This is my journey.

Before I wrote, I read. I would devour books. Enid Blyton’s ’Secret Seven’ series was a favourite. I would lie on the floor by the door after lights out, reading by the chink of light that crept in under the door. I lost myself in the imaginary world of boarding schools and the mysteries of Nancy Drew. My nose was always in a book. I can still remember staying in the car at the Heights of Abraham in Derbyshire to finish reading Aldous Huxley’s ‘Brave New World’. My parents did not approve. And then I imagined. I cut people out of magazines and gave them names and families and lives. I still have my ten favourite paper people safe in an envelope to this day. My friend and I created imaginary lives as estate agents (for some obscure reason!) and scientists conducting experiments in the back garden.

From there I started to write stories. I remember clearly reading my version of the tale of Icarus and Daedalus to the whole school. I wrote three 50 word stories for a competition in one of the Sunday newspapers. I poured out expressions of my teenage angst onto scraps of paper. I still have some of them. I am still forcibly hit by the pain and confusion and obsession with death (as I say, teenage angst). On 9 June 1984, I wrote my first short story. Maybe I’ll let you see it sometime. I wrote to make sense of life. Maybe writing helped me to survive. Maybe I stopped writing to survive.

As part of my degree, I spent a year in Chartres in France, and there I wrote poems, meditations and co-wrote a play entitled “Coeur de Pierre”- all in French! At that stage, I felt freer communicating in a language that was not my own – work that out if you can! From then onwards, for a couple of decades, I channelled my creativity into teaching French (temporarily); having babies; sticking and painting and playing with play dough; creating life story books; organising great kids’ themed parties….and it was not enough. I began to write again – first Sunday School materials, then assemblies, then blogs on ethical issues, then catalogue copy…. – and then I found my way slowly back into fiction via short stories and children’s stories. I was released into creativity by a workshop by Robert Cooper (half-time Parish priest and half-time photographer) and by working through ’The Artist’s Way’ by Julia Cameron.

I am a writer. Writing is ’my thing’. I never feel more fully alive than when I am writing. This is what I want to do for the rest of my life. ’Secrets Such As These’ will probably not be my best novel. But it will always be my first. It will always be a special reminder that it is never too late, that it is OK to write and that I am actually allowed to live my dream. 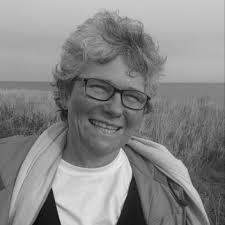